NFL superstar Tom Brady announces he is ‘retiring for good’ 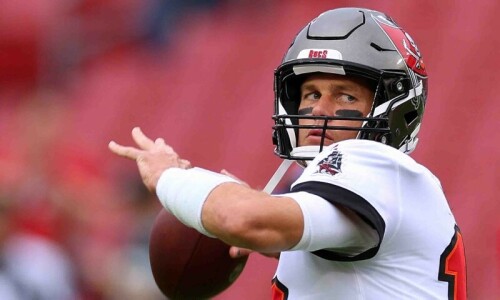 Courtesy: Dawn News/AFP Record-breaking NFL quarterback Tom Brady announced on Wednesday that he was “retiring for good” at the age of 45, one year after reversing his decision to quit the sport. Brady, whose Tampa Bay Buccaneers lost in the wildcard round of the NFL playoffs last month, made his announcement calling time on his […]

Courtesy: Dawn News 1,243 people put to death in the kingdom between 2010 and 2021, says Reprieve • Pakistanis make up highest number among those executed KARACHI: While the Kingdom of Saudi Arabia has rebranded itself as a country open to investment, tourism and engagement with the rest of the world under powerful Crown Prince […]

Courtesy: Dawn News PESHAWAR: Police in different parts of Khyber Pakhtunkhwa held protest march to condemn the Monday bombing of a mosque inside a compound that left more than 100 dead and scores wounded. In an unprecedented move and what is believed to be the first of its kind, over 24 uniformed police personnel gathered outside Peshawar […]

Courtesy: Dawn News Journalist and anchorperson Imran Riaz was arrested by the Federal Investigation Agency (FIA) in Lahore in the early hours of Thursday morning, according to his counsel Mian Ali Ashfaq. Ashfaq told Dawn.com his client was taken into custody from the Allama Iqbal International Airport by FIA’s cybercrime wing. “The details of the case filed […]

Courtesy: Dawn News Awami Muslim League (AML) leader and PTI ally, Sheikh Rashid Ahmed, was arrested by Islamabad police in the early hours of Thursday. Ahmed was taken into custody in connection with remarks he allegedly made against former president Asif Ali Zardari, accusing him of hatching a “murder plot to eliminate PTI chief Imran […]

Courtesy: Dawn News/Reuters KYIV: Ukraine hopes to secure widespread international support for banning Russian and Belarusian athletes from the Paris Olympics due to Moscow’s invasion, the sports minister said on Tuesday. The International Olympic Committee is open to including Russian and Belarusian athletes as neutrals at the 2024 Games and has opened a door to […]